Rosh Pinah is a mining town located in southern Namibia, close to the border with South Africa. It is situated 360 kilometres (220 mi) south of Keetmanshoop in Namibia’s //Karas Region. West of the town lies Diamond Area 1, the main diamond mining area of Namibia. Rosh Pinah belongs to the Oranjemund electoral constituency. The town is connected via road to Aus. Minerals mined at Rosh Pinah mine include copper, zinc, tin, lead, and silver. Like other mining towns in Namibia, the settlement was created when the mine was opened. The 2 mines established RoshSkor to manage the town’s municipal-related services and affairs because Rosh Pinah does not fall under any regional government authority.  Over the years, the town’s development has become less-dependent on the mines and RoshSkor has set its objectives to drive the town to sustainability.

When a mine starts up in a desolate area, a piece of land is allocated to the mine for the purpose of erecting accommodation and other basic facilities for their employees. (This is called an Accessory Works Area.)  This is the background of Rosh Pinah, which was established in the early 1970’s.

The majority people either work for the mines, or for contracting companies that work for the mines.  A small group constitutes people who work in the banks, shops, schools and other supporting institutions.  Since the establishment of Skorpion Zinc was complete, the town has showed very little growth in terms of numbers and virtually no development in terms of the business fraternity.

The two mines spend generous amounts of money and effort in different sectors in Namibia to uphold their social responsibility.  These investments vary from supporting education, health services, skills training and local economic empowerment.  Rosh Pinah has a private clinic of a very high standard, as well as a newly refurbished Government clinic to ensure outstanding medical services at all times.

Zinc is the primary metal that is mined at Rosh Pinah.  It is termed a base metal, mainly used in the steel industry – it is being used to galvanize steel.  A well-known product is zinc sheets used for roofing on houses.  Unfortunately this is a much cheaper commodity than diamonds, gold, copper or platinum and dependent on the international demand for steel at any given time.  The Zinc market is therefore very vulnerable to international economic fluctuations.

For many years there was only one mine, Rosh Pinah Zinc Corporation.  During this time the town was less than 50% of its current size.  From the year 2000, Skorpion Zinc was established and the town steadily increased to more than double its original size.  Currently Rosh Pinah is home to approximately 7000 people.

Rosh Pinah’s economy is completely reliant on the presence of the mines.  The small economy is fueled either by the salaries earned by mine staff or by staff of contractors that do work for the mines.  Any fluctuation in the international Zinc Industry or performance of either one of the two mines has an immediate impact on this micro economy.

For a visitor there is some interesting things to do, or places to visit (to mention a few):
Typical challenges that face the residents of this small and friendly town include: 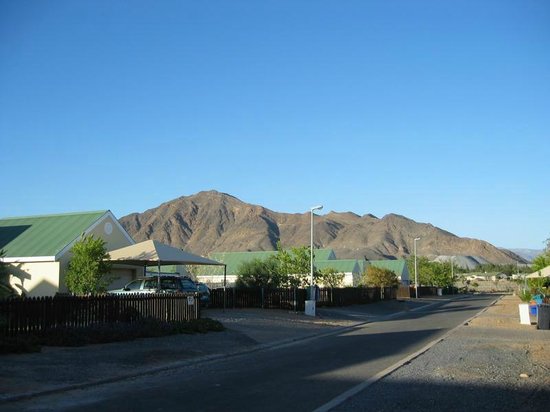